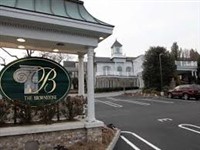 Marie Dionne Warwick is an American singer, actress, and television show host. Dionne was named after her aunt on her mother's side, joined Gospetaires from time to time, including Judy Clay, Cissy Houston and Doris. Her hits include, "That's What Friends are For", "Walk on By", "Do You Know The Way to San Jose" and much more. Whitney Elizabeth Houston was an American singer, actress, producer, and model. In 2009 Guinness World Records cited her as the most awarded female act of all time. Enjoy a family-style Menu with 2 Complimentary Drinks.